A downloadable game for Windows

WILL YOU SURVIVE DIO'S ALTERNATE UNIVERSE?

JoJo's Bizarre Adventure: Universe of Dio is a simple platformer where you control Jotaro and his stand Star Platinum. This game was made for the Glorious Games elective for my school, I decided to upload it here because I want to improve the game and make it into an actual full fan game for those to enjoy. Please leave feedback as it's much appreciated.

Open it and enjoy :)

The concept itself is nice, and the game's fun to control. I honestly love the idea of controlling both Jotaro and the stand, but it's probably not implemented in the best way. Maybe switching the primary punch to the space bar and the zawarudo on the shift key would help!

one thing i did notice is that jotaro's not really made for a platformer genre, the controls don't allow for a lot of fun, maybe try to structure the levels less around platforming and more around making use of the stand. And allow the player to skip ahead of one line of dialogue in the intro, i feel like that would make it easier to follow the main storyline without getting bored or frustrated because of the speed of the text.

Looking forward to see it develop further!! I'm enjoying it a lot so far ^^

Game crashed after one play? Also can't open after that. Also uses 30% CPU while not even on the game, just trying to open, which it never does.

could we instead have like have star platinum as,star platinum? not a hieorphant green or highway star

Yo, remember me? I was one of the first comments and I gave my feedback and thoughts on your game and after checking it out again today (in order to show it to a friend when discussing interesting mechanics - individual control of both stand and stand user) I realized you implemented everything I discussed and it's really working! Great job! :D

this game is very creative, I think having the single ora do so much damage makes the rush pretty useless (huh, fitting... muda muda), I would love to see this concept with non punch ghost stands (such as hierophant green or stands from other parts, espacialy having things like scary monsters would be cool) I would also add some shadow or something to show what pillars and ground is on the same layer as you and what isn't, had some trouble telling in some parts.
overall, great idea that needs some extra polish.
WE NEED MORE SINGLE PLAYER JOJO GAMES

I liked the idea of controlling the stand and the user separately.

But i can't control simultaneously in the current input map.

Maybe making jump = "up arrow" would help, so i could control Star Platinum and Jotaro each with a hand.

Waahh.... only watch the trailer tho but its great, ora ora ora definitely need to be faster XD

i havent play it but i think it will be funny if there are a separate multiplayer mode tho, controlling jojo and star platinum will be a bit tricky

if you have a friend then im pretty sure it'd possible to have them control star platinum while you control jotaro, and vice versa.

I really enjoyed the concept of this game, but I was having issues getting used to moving both Jotaro and Star Platinum. I think it was an interesting idea to have them be able to move independently of each other, but I am not sure if it completely pans out.

I didn't play very far in, but I honestly would love to see more some day. The intro was amazing by the way.

Thanks for the feedback! I'm currently trying to balance the game and somewhat make it more playable. I tried going for a different approach for a JoJo fan game as most of them I've seen were MUGEN fighting games and I'll try to make my project more enjoyable for other audiences. Feel free to give me ideas/feedback because I want this game to be more enjoyable!. I'm really glad that you liked the intro!.

It's an interesting way to go about making a JoJo platformer with stands. With a lot of polish, I could really see it become something truly special. As is, not so much, especially the combat (I do understand why getting hit once means instant game over - humans are weak and stands are what's strong).

One thing I enjoyed a lot was the use of the sprites from other games (J:US for DS and JJBA for Dreamcast) to make up this one. Smart

Edit: I want to be clear in saying that I am looking forward to what you do next and by no means want you to be discouraged by anything I said

Thanks for the feedback! I don't really know how to respond since this is the first time I actually got feedback but nevertheless I see how the combat needs fixing, I'm trying to balance the game and somewhat make it more playable. I'm also glad to hear that you enjoyed it!, Feel free to give me ideas/feedback because I want this game to be more enjoyable!.

(Please don't think that I would be discourage because it's the exact opposite!)

Alrighty then. Here are some ideas (take them with a huge grain of salt):

I love the fact that you implemented stand range into the game and I like the teleporting thing SP does but more often then not, I would try to line up SP in front of me while JJ was moving and then I would nudge SP just a little bit too far and all the sudden he's behind me and I walk into an enemy I was preparing to attack with SP just seconds before. This happened a lot with the DIO boss fight too (that really needs some rebalancing). A possible fix to this would be getting rid of the teleporting SP back to you whenever he's out of range, essencially making him go against an invisible barrier instead so he won't go out of range but won't leave his positioning and make it unreliable to have him go for enemies when you can't gauge the distance between the two. Like an invisible circle around JJ that SP can't go beyond but without him teleporting back to you whenever he touches the circle. This, in my opinon, would greatly help in controlling both JJ and SP in a comfortable way without getting rid of the cool range mechanic

I am really biased because my favorite genre is metroidvania but I could really see this becoming an interesting one, where JJ regains his SP abilities as he tries to escape DIO's universe, slowly increasing your arsenal. Just a thought.

Bonus: Rebinding keys - While it doesn't seem important, I kept tripping on the game because I wanted to control JJ with WASD and SP with the arrow keys but the game does the exact opposite. It's a really minor thing though so don't bother with it at this stage :)

I hope this wasn't too long of a wall of text haha and, again, take these points with a grain of salt. It's your game so do it however you want to :)

Reply to be gay in my universe 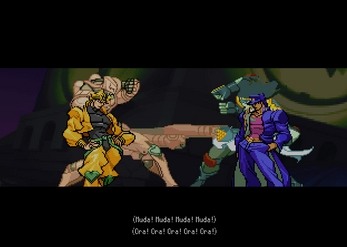 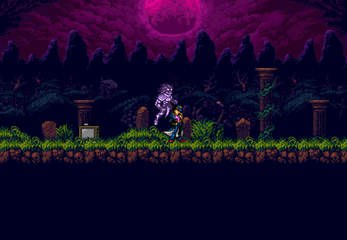 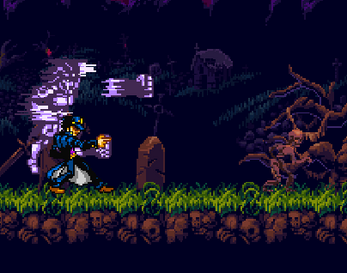